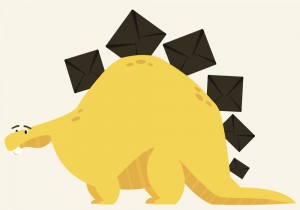 I recently met a prospect who asked me to help with a problem she was having with her email platform. She had commissioned a purpose built platform nearly ten years ago, the company that built it were taken over in 2008 and the new company stopped supporting and updating it in 2010. As she saw it, the system was still fit for purpose, i.e it was still capable of managing data, sending out email and it cost very little – just the monthly price of an SMTP server and a web server for image hosting. The perceived problem was that the creative needed to be fixed because she was experiencing some delivery issues. Before I met with her I registered on her site and duly received the double opt-in email to my junk folder. On inspection of the headers I found it to be SPF neutral, and not DKIM or domainkey signed.

At our meeting I discussed what she felt was happening with her email and was surprised to hear that she had been advised to send text only emails and had no open or click stats. They were not receiving FBL complaints, they were not cleaning their database. A subsequent blacklist check on the sending domain revealed them listed on five of the major blacklists. They were, in effect, blindly mailing 400,000 subscribers every week and hoping that some came back to their site. This was not an issue that could be resolved with a simple design and copy fix but it did get me thinking; how many people out there have collected their data in a proper opt-in, or in this case, double opt in manner and were counting pennies that were costing them pounds?

In this instance, the acquisition cost of a record was suspected to be £3 although there weren’t exact costs on that. However, with all their double opt-in emails getting junked how many were they losing between registration and confirmation? Let’s be optimistic and say 80% of people found the email in their junk and followed through on the confirmed opt in, then 100,000 people fell through their cracks at a cost of £3 acquisition. That is £300,000 wasted on data that never got on your list. If we were being more conservative with the success of the double opt-in then you can double or triple that figure as the simple cost of the legacy system. However, things are much worse than that.

Firstly, what is the opportunity cost of the extra data? Well for this client, who is a media owner, they are looking at a cpm cost every week of £2 per ‘000 per sponsor of which there can be 5-6 per week on nearly 100,000 records, or around £50,000 per year. This is all the opportunity cost of the lost data. However, what hasn’t been taken into consideration is the increase in revenue this client could be charging if, once they had this data, they could actually get a much higher percentage of their emails delivered. Their cost of sale would go down as attracting new customers wouldn’t be so difficult on a database of 500k that was delivering and subsequently performing better. If data performance goes up then they can justifiably increase their CPM’s and also start to monetise their other subscription based offerings which are suffering all as a result of email delivery using a legacy system.