A question that bugs many an email marketer – is there a best day and/or time to send a campaign? You’ll probably find lots of sources telling you that Wednesday is definitely the best day, or 9am is always the best time, but it is hard to imagine one size fits all and engagement simply must be reliant on other factors than simply what time you press go. All you can do is analyse your own data to see if there is an obvious pattern.

I thought I’d give analysing a 3-month dataset, which includes campaigns sent throughout the week and at various times in the morning and evening, a whirl to try to tease out any nuggets of insight. So, firstly, looking at the overall patterns of opens from the time a campaign is sent: 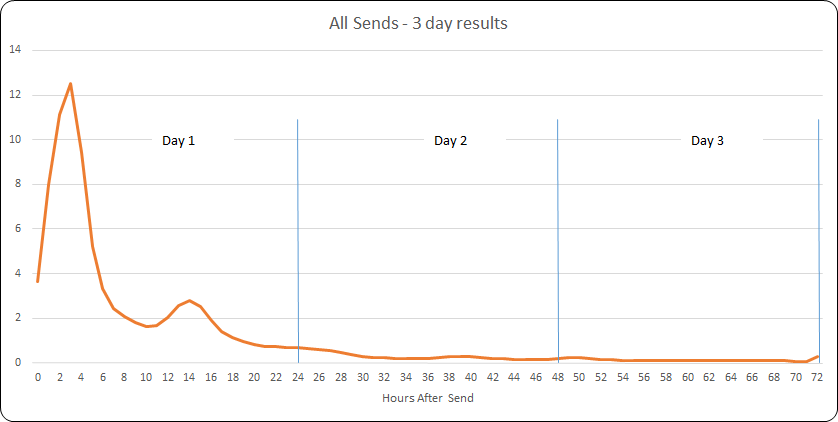 So, it is clear the majority of the opens will happen within the first 24 hours (81.76% in the above example). The volume of data is throttled over 4 hours in this example to give the data a chance to deliver smoothly and at the 4-hour mark, 44.68% of the opens have occurred by the time the data has theoretically been mailed out, then it tapers off with 91.37% of the opens having occurred after 3 days. However, there is a curious peak between the 11 to 14-hour mark.

Sending Times
So, we know this data has been sent out on various times and days of the week, but taking the most common times in the morning and afternoon we can see if any sort of obvious pattern emerges: 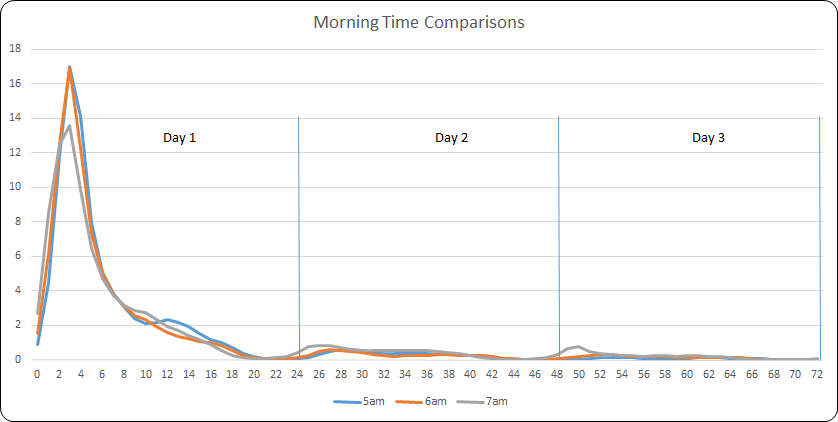 Looking at the morning sends starting at 5am (9am finish), 6am (10am finish) and 7am (11am finish) we can see they all follow a very similar pattern with the bulk percentage again opening within the first day (and first 4-6 hours) although there is something going on with 7am which makes it a little lower than the other two. There are also some subtle peaks around the 24 and 48 hour marks suggesting people are opening the next morning, and even the morning after that. 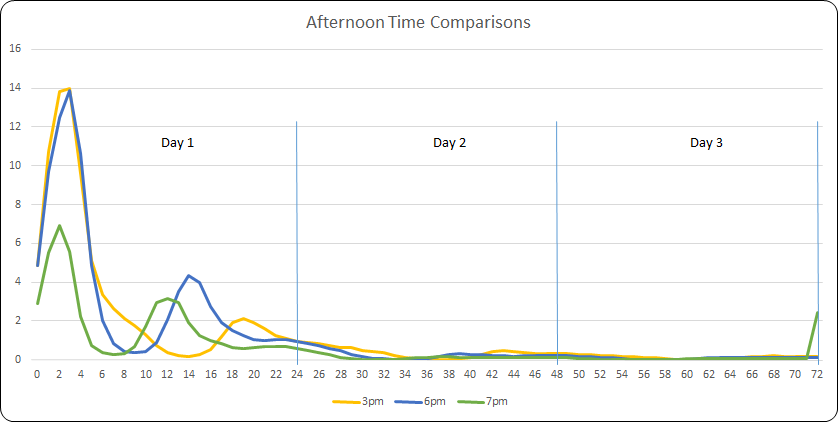 The afternoon shows a wildly different pattern where the opens come to a halt and peak again, coinciding with the night and the next morning so no real surprises here. Although, for some reason there is much less interest for the 7pm sends than 3pm and 6pm and a huge influx 3 days later so there is obviously something else at play here and we now need to look at the days these times were sent. 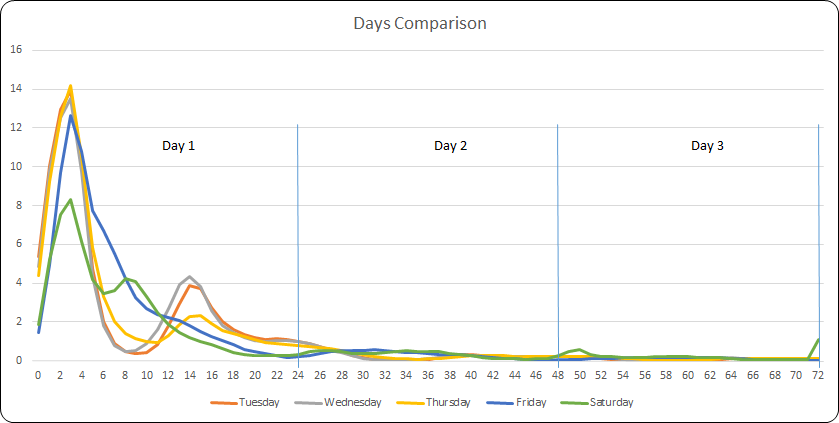 So regardless of day, once again the bulk of opens are picked up within the first 24 hours. We can see watered down versions of the time trends suggesting the campaigns were sent at different times on the various days, but the standout day in this scenario is Saturday which has been sent at the most part at 7am. So, fewer people than average open it straight away on a Saturday morning with a resurgence at around 3-4pm, but a higher proportion than any other day will actually open two and three days later (Monday and Tuesday), presumably when they are back to work which suggests emails are perhaps more frequently read on a weekday rather than weekend.

Campaign Performance
We can see how the percentage of openers have performed against each other, but how have the actual campaigns themselves performed based upon day and time?

So looking at this, afternoon and evening sends seem to produce better results as does sending on weekdays excluding Fridays. But is it as simple as all this? 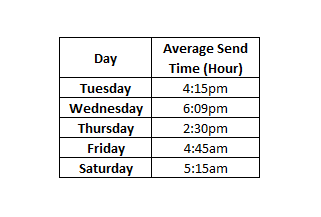 Fridays and Saturdays have predominately been sent in the mornings and Tuesdays-Thursdays in the afternoon so already the results are muddied. Is it even possible to say which criterion is causing the lower averages, i.e. is it the day that produces less opens or is it the time? The only way to really find out would be to start mailing in the mornings for Tuesday-Thursday and the afternoon/evening for Friday and Saturday to see if the expected changes in averages occur and only then could there be a definitive answer. There are also many other factors which could affect how well a campaign performs, be it the type of mailing (i.e. sale, information), how targeted it is or the frequency of recent sends to name but a few. Take the 3pm results – at first glance it is way above average but there was an atypical campaign sent at this time during this 3-month period which drew in a much higher open rate than usual thus skewing the results.

All in all, it seems very tricky to really pin down an ideal day and time for sends as there are just too many factors at work. Given that 45% of the data (at least in this example) appears to open an email pretty much straight away upon receiving it (at least no more than 4 hours later) the obvious thing is to try to capture your audience at a time when they are most likely to be free to peruse their emails. With mobiles, this can of course by pretty much any time of the day. If you are, for example, sending out a sales email you also need to ensure both the email and your website are mobile friendly to encourage clicks and ultimately conversions. Saturdays appear to be the only day where you may potentially be targeting a slightly less engaged audience as Sundays are also relatively quiet on top of this, but Mondays and Tuesdays do show an increase of interest in the mornings so tallies with people returning to work and viewing their emails at this point.

Saturdays may be the worst day to send due to a disengaged audience. Afternoon and early evening sends seems to perform better than early morning ones. Or is it all just a false positive with too many other factors at play?

So what have we learnt? Saturdays may be the worst day to send due to a disengaged audience. Afternoon and early evening sends seems to perform better than early morning ones. Or is it all just a false positive with too many other factors at play? All you can do is test your own data factoring in as much as you can to see if any trends emerge but from what I can tell there doesn’t seem to be a magic formula, although one thing to note is a high proportion of people seem likely to open an email when they first receive it, so as long as you pick a time when people are likely to be active, this seems as good a place as any to start.

3 comments on “Time waits for no man…or email campaign”